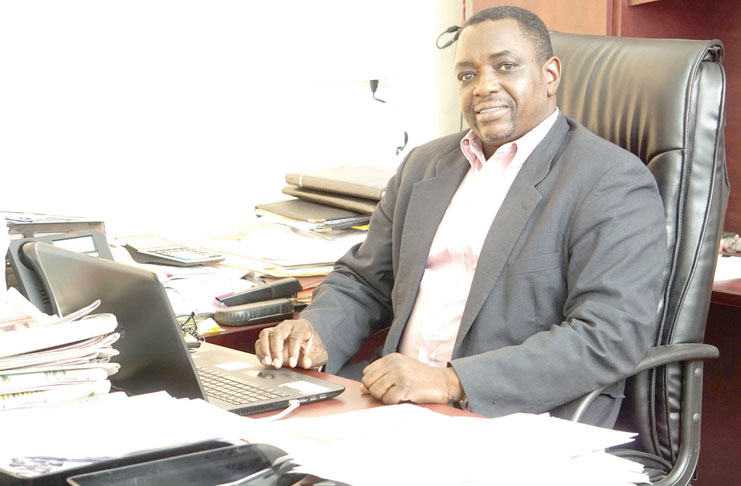 Small businesses can do for Guyana what it did for the United States, says Chief Executive Officer of the Small Business Bureau (SBB) Dr. Lowell Porter.

In an exclusive interview at his office in La Penitence Georgetown, Porter explained that Guyana needs a structured business environment or support in place just as the US did. “It’s new, we are building on it and we are going to be just like the United States where the US had this Small Business Development Center,” he said.

The man at the helm of small business in Guyana said that he is focused on having small businesses developed and to do this he said the Bureau is providing loans through relationships with commercial banks, which offer grants, training and development coaching.

To this end, he thanked Republic Bank and GBTI since they are the only two banks that were willing to come on board. The work, he noted, is better accomplished through partnering with institutions who share space and staff. This, he said, is done to achieve more reach.
He further stated that there are some policy developments in the pipeline that are presently before the subject minister for approval that are for the betterment of the Bureau.

Presently,y the SBB has a database that records over 10,000 clients with small businesses and a sample survey was done last year to see the status of those people found that 70 percent of them were still in business.

Porter, however, stated that the goal of the Bureau is to have “help desks” in all 10 regions. This is to adequately reach persons.

He, however, noted that the Bureau is challenged in its work. “Given the limited budget and the limited other human and technical resources that are critical to make this whole idea of building strong robust sustainable small businesses,” he said.
He called for more value to be placed on people doing small business. “Nine out of 10 times those small business people are dead serious. They believe in what they want to do but they don’t fail because of their own laziness but because they don’t have the necessary resources readily available,” he stressed.

Success stories
Relating the Bureau’s success stories the business boss said that there have been clients who started out packaging their products in regular plastic bags but now has packaging that meets international standards.

Using three scenarios from the ‘In-school School Entrepreneurial Programme’, he highlighted a student who started off doing lubricants in a riverine community. “He started with $30,000 and today they have a bond that he built on his own and today he has a flourishing business,” he said.

He said a similar story happened in Aishalton with a young lady who has a flourishing cake business which she started through the programme.

And Also in Paramakatoi, he shared the story of students who have done so well that they have created a money lending agency. “These show entrepreneurship, that they have been making a profit, they have monies available and they are expanding their business,” he related.

He, however, noted that the Bureau has not been able to track most businesses successfully to know where the persons started, where they are now and what they did to make that happen since many of the businesses would branch off on their own with their own finances AND with their own families supporting them.

He believes that the ‘In-school School Entrepreneurial Programme’ is good for Guyana since it helps to inject ideas into children’s minds of entrepreneurship. “And at the end, we believe we can have a better entrepreneur,” he said

Get registered
The CEO said they have noticed a lot of informal businesses around. “I urge all small businesses to get registered. The SBB is a government entity and as such all the services are free,” he implored.

He explained that the SBB identifies persons who have a business and depend on that business for their livelihood we have now intervened on those people to find out how can we improve what they are doing.

As such the client is brought into the office and is trained and helped in understanding how to manage a small business, how important it is to keep records for that business and what is the process in coming to the bank or the SBB for a loan or grant.

He further explained that the SBB does not lend any money but has a relationship with lending agencies where the SBB would provide a collateral guaranty.

One can also apply for a grant which has to go through a grant committee. It must be a registered business and has to be GRA and NIS compliance among other things.
It was only in 2004 that the SBB Act came out, but it wasn’t until 2010 that the Act had an office space and it was only in 2013, into 2014 that funds were made available, Porter related.

Monies were injected through the Carter Grift programme to the tune of around US$1.6 million and over the years from then to 2018 the Bureau had distributed 595 grants which totals $184 million and which saw some 194 loans given out at an interest rate of 6 percent.

He said the SBB is trying to foster a better business climate through its engagement with small businesses and as such has tried its best to have a client relationship where the clients can go in and speak about their business.